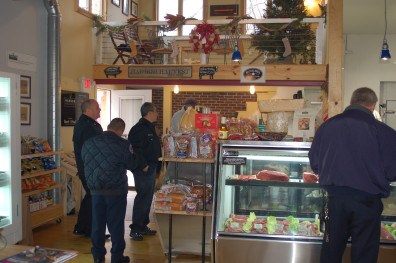 Harbor Harvest is a homegrown retail venture in local-sustainable food conceived by Robert Kunkel and partner Ernest Marsan thatâ€™s about to disrupt the retail food market. The duoâ€™s first location has taken root in the East Norwalk neighborhood where Marsanâ€™s family has a longstanding history of serving and supporting the community at Partnerâ€™s CafÃ© & Pizzeria.

The natural wood exterior immediately sets the building apart from neighboring homes while announcing the novel retail concept that awaits. Inside this fully-renovated, former 1940â€™s grocery store, a full sustainability program is underway. Run by Sustainability Coordinator Christina Giglio, an environmental biology graduate of Sacred Heart University who grew up on a farm, the focus is on sourcing and selling food from local farms and producers, and growing some of their own.

Head first to their nose-to-tail butcher shop at the back of the store where beautiful cuts of aged beef and pork from whole animals purchased from Kiernan Farms and Meile Farms in New York State fill the cases. During my visit, a fire engine pulled up out front and the hungry firefighters made a beeline to the back counter to order lunch and talk meat cuts with Master Butcher and Head Chef Sal Cataldo. â€œCustomers are excited to find cuts not seen at this counter in decadesâ€ says Kunkel, whose grandfather was a butcher.

Kunkel is a big, innovative, and even revolutionary thinker. Alternative Marine Technologies (AmTech), his ship construction and design firm in Stamford, was the project manager for the construction of the first hybrid-electric research vessel in North America, The Spirit of the Sound. This 65-foot, â€œgreenâ€ ship was built to suit the specific needs of the Maritime Aquarium of Norwalk where itâ€™s been running two-and-a-half hour cruises for the public since July. Learn the full story of the boatâ€™s creation, and get a great feel for its green technology, features, and size, in the video below.

Vegetable bins near the front of the store will be stocked with CT Grown and Long Island Grown produce and fruit in the spring and summer months. Harbor Harvest has just contracted with a CTNOFA member farm that is a Certified Organic vegetable grower to ensure a regular weekly supply this coming season.

Shoppers will find the Harbor Harvest â€œsustainable community grocerâ€ experience a hybrid between conventional and local-organic, a direct reflection of disparate consumer tastes. â€œWe attract shoppers from Westport, Darien, New Canaan, Rowayton and SoNoâ€ said Kunkel, â€œand millennials love us. But the East Norwalk neighborhood doesnâ€™t want to go past the train tracksâ€ he added. So they strike a balance by watching their prices, selling some of the foods and goods customers are used to buying, and promoting green options while offering to take them back if the customer isnâ€™t satisfied.

Harbor Harvest is also hydroponically growing small batches of microgreens in an industrial-sized Urban Cultivator under Giglioâ€™s watchful eye for local restaurants including Washington Prime and The Spread. â€œWe are growing amaranth and sunflower greens along with herbs including thyme, sage, mint and basil from CT Roots in Stamfordâ€ says Giglio.

On display is a residential hydroponic unit from Aitoro where herbs and microgreens are grown on a scale suitable for home use. Growing your own has just gotten a whole lot easier and you can do it year-round.

Head Chef Sal Cataldo has run a number of popular culinary events at Harbor Harvest, including private dinners, cooking classes, and wine tastings. Expect more regular and special events, including an outdoor grilling and smoking series, and possibly parties in a rooftop garden now in the planning stages.

Come spring, their delivery fleet of Pedego electric bikes will be lined up outside the store, enticing passersby to rent them for leisurely rides around the neighborhood. Just a block away, oyster boats from Norm Bloom & Sonâ€™s Copps Island Oysters harvest some of the most coveted seafood in area, which of course can be found at Harbor Harvestâ€™s seafood counter. If you get lucky, you might just see them heading in with the catch of the day.

â€œItâ€™s so cool to see our mission come to life, see how many people it impactsâ€ says partner Ernie Marsan, â€œone neighborhood at a time.â€